Some of you probably won’t like what I’m about to say, but think about the consequences.

I have a few comments on this. I’ve seen the little tent cities, and the increase in homeless here in my own city. I’ve watched as governments move to cover it all up lest people get irked by a society that cannot take care of ALL its citizens.

But the Lamestream (An appropriate reference to the mainstream corporate media!) media doesn’t report it, most of us never know about it lest we see it with our own eyes. The reason I call them lame is because the ‘news’ they report is really nothing of the sort.

But it’s true that if we don’t increase revenue this country is headed down an unsure path. I also love how the S&P report calls out the Republican obstinacy in their report on downgrading the U.S. debt rating.

The article does make an interesting observation though. It’s the Tea Baggers that are causing Boehner to tack to the extreme right.

Note my use of the term “Tea Bagger”. I mean it. In fact they meant it too, as evidence: 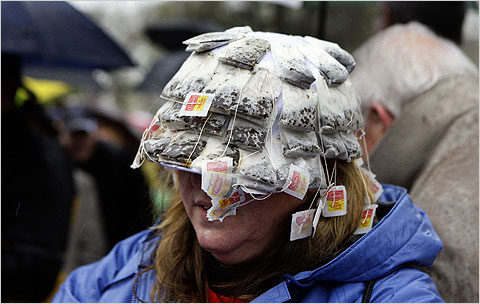 I refuse to call them anything but Tea Bagger. And in doing so I’ve been accused of using sexual innuendo when referring to those of that persuasion.

We need to ridicule and denigrate the Tea Baggers. That’s the best way to deal with their bovine effluent. Call them out on their crap on a regular basis. Make it so they cannot hide, they cannot run.

And apparently, their song is playing off tune to most Americans too. Even Tea Party darling Christine O’Donnell only got FIVE people at her book signing. Five!

One thought on “A strategy to restore sanity – Updated”