It’s been an interesting years. Rhode Island got Marriage Equality – yet the posts I’m most popular for are things I wrote a LONG time ago. Go figure.

The WordPress.com stats helper monkeys prepared a 2013 annual report for this blog.

The concert hall at the Sydney Opera House holds 2,700 people. This blog was viewed about 15,000 times in 2013. If it were a concert at Sydney Opera House, it would take about 6 sold-out performances for that many people to see it.

Excellent, this is a good breakdown of the issue.

The panel was comprised of our old favorite bigot Brian Brown of the National Organization for Marriage (Every time I write that line I feel like stating the obvious, it’s an oxymoron!), Aisha Moodie-Mills  from the Center for American Progress, Josh Barrow  from Business Insider and  Rachael Bade from Politico.

Toward the end of the first part Brian Brown is going off and Josh Barrow takes issue with what Brown is saying. And then Brown starts getting increasingly more shrill as he goes on. He cannot defend his position any longer and so he’ll resort to umbrage at being labeled as a bigot. The real truth is, he IS a bigot. He just doesn’t want to hear that – it causes a great degree of cognitive dissonance.

You have to watch Brown, the voice register goes up and the eye rolls start. He’s pulling it straight out of his own ass. It comes in at around 16 minutes in the first clip. You get to hear Barrows response in the second bit.

Now if you’ve followed this blog for some time you probably know my politics. I’m ultra-left liberal. I feel discrimination of any form when it comes to race is wrong, and that government should never allow the people to pass laws to restrict rights. This particular survey is about crime and punishment. I think our current system is seriously broken and that the punitive aspects should be reduced while the rehabilitation aspects enhanced.

Now for my results of this survey above: 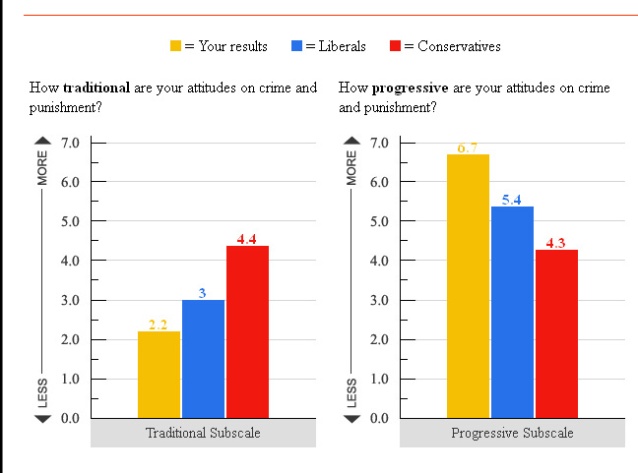 Being that I’m way ahead of the new year I actually think Sean’s MEMEs means I’ve done a TMI early. Yay!

Entertainment –  In 2014 I’d like to see more movies that interest me. i mean why won’t they make movies of some of my favorite sci-fi and books I’ve read? Interestingly we were with friends for Christmas and they had the movie The Hobbit. Hate to tell you I’ve read it already and the movie tried it’s damnedest to spice up that book. Now the Canterbury Tales – that didn’t need much spicing.

Politically – I’d like to wall off the southern United States. A 5,000 foot wall. It will only be temporary until they can demonstrate that they understand the U.S. Constitution and understand the level of corruption present in our government that was cemented by the Citizens United decision in the U.S. Supreme Court. That would solve a LOT of our problems.

Globally – Energy independence in the form of solar, wind, tidal, whatever it takes. The global impacts of just doing that would change the geo-political game for the better and get us off fighting for oil.

Friends – Believe me, come the holidays we see everyone.

Your suggestion – To hell with them all. That’s the more gentle version btw.

At least not logistics planning.
But the United States Postal Service is the real deal. I’ll explain why.

I ordered a bunch of toys and stuff for Keyron’s mom on Amazon. Because I haven’t signed up for Amazon Prime I chose USPS shipping. All items were ordered/shipped between December 14th and December 19th. All packages arrived WELL before Christmas eve. Even the package shipped on the 19th got there on the 24th. No problems. And I love USPS – you can buy the postage online plus they even GIVE you the shipping boxes and in addition you can schedule pickup. That’s a service, one you wouldn’t get from UPS or Fedex unless you’ve a good sized business.

I did four jars, started with a brine mix of two tablespoons of salt to one quart of water. Then I stuffed the jars with three or four cloves of garlic, a big chunk of dill and a little bit of black tea to preserve some crunchiness. They’ve been fermenting away for five days now.

So I sacrificed a jar. Wow – they taste awesome. The garlic is definitely evident as is the dill. And they’re only slightly salty, tangy, and delicious. Far better than what you can get in the supermarkets. 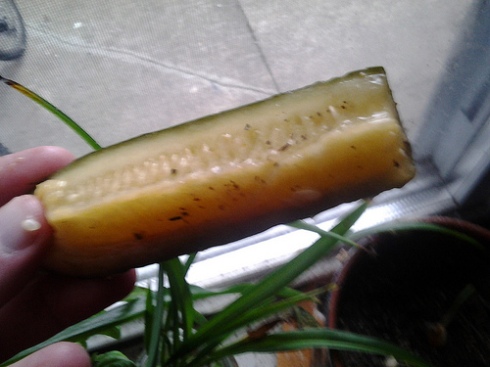 The other jars are going to be allowed to go another few days – i want the tang or sourness to increase.

Now here’s the thing, I have eight more Mason jars – I’m thinking serious vegetable pickling here. Broccoli, carrot, cauliflower, peppers. Yum! And if I’m feeling adventurous I may even try kimchi only that’s a different process altogether but the same bacteria do the job. It’s good old Lactobacillus. It’s all around us.

And I may even try making a sour dough starter. This is seriously cool. How the hell did we ever lose these skills?

You may call it Christmas, Solstice, Saturnalia, etc. A happy one to one and all.

Resume the celebration of the light, the equality, or the pseudo birth of a certain deity.