I love doing lactobacillus pickling to make sour dill pickles. Did three quart size jars this time. And instead of just a little black tea, I put who black tea bags in each jar. We’ll see how it goes. 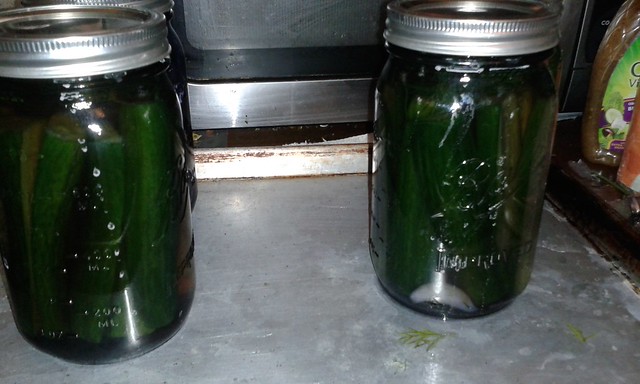 So far I’ve done cucumbers, bell peppers, and jalapeno peppers. The jalapeno – left the seeds in place on some, remove on others. Oh the flavor of those was awesome.

It’s pretty easy to do. Sterilize jars and lids. Then make a brine – 2 tbsp salt to a quart of water bring it to about 180F.  I cut these mini cukes in halves and through in 3 or 4 cloves of garlic, along with a big dose of fresh dill and a tea bag filled with black tea. Then pour in the brine – leave about 1/4 to 1/2″ of head space. Drop the sealing plates on and loosely tighten the rings.

Let them ferment for about two weeks or so. They’ll be sour, crunchy, and delicious. Just enough salt in the brine too.

One thought on “More pickling”