So the other day I read a post that I’m of that generation that lived before we had the internet. Can’t say I wasn’t connected – had a 2400bps modem and a bitnet account. They were the precursors to the Internet.

But other things that changed in my lifetime are as follows:

So had occasion to get a Ford Escape for a  couple of hours today.

I’ll get it out of the way at the beginning  – I don’t like the vehicle for a multitude of reasons.

So yesterday we rolled out by 09:00 and hit our new breakfast spot the West Side Diner. It’s an old diner that’s been rehabilitated.

Should have seen it before this – plus there’s a big addition out back that houses more table space and the kitchen. Kudos to the owners – really nice job on this one.

By 10:30AM we had hit the first of the Saturday circuit called Market Basket in South Attleboro, MA. I seriously love that place. Everything you need and not too outrageously expensive. We tend to gravitate toward fresh fruit and vegetables, but the store also has the most rocking Sushi in the region and it’s in a supermarket, they do Nigiri and Maki though I’m sure special requests would be honored.

Back home to stash the comestibles in the fridge. And then off to out other haunt, Trader Joe’s in Warwick, RI. There the biggest item we get is fresh flowers. Started the practice about 36 months ago and I love the colorful array of flowers. It’s a small price to pay to make me happy I suppose.

The reason we had to do all this on a compressed schedule was because we were to attend a Book unveiling in Newport, RI. The author is a good friend of ours and so this was obligatory.

The book if you’re interested can be purchased on Amazon. It’s called Newport Knights and was written by H. Beth Loomis.

At the event the author made a rather emotional speech – the book is really about the character she’s met ever since she opened a shop in Newport, RI but also about the history of the area. But she called up what she calls her Knights – and my guy was one. I’m just the genius. 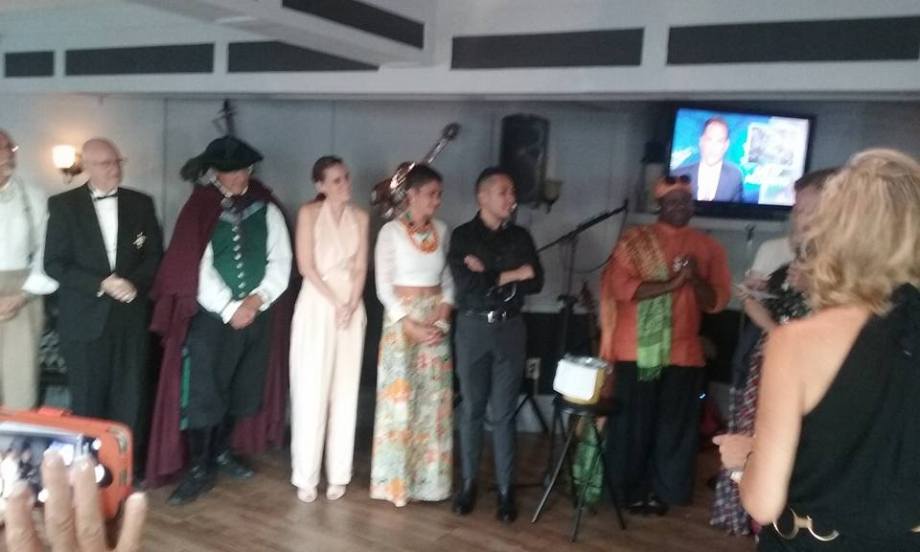 From left half of the couple of John and Rico, Jim, unknown, Meghan, Liew, and Keyron.

The best part though got to meet the gay couple who owns a shop down the street from the author. They’re older but very interesting guys. Rico and John have been in Newport for 34 years. So I bet they can tell some tales. We’ll definitely talk to them again.

And it’s funny I’ve learned over time I get one of three reactions when I talk about what mankind is in for in the near and long future. Those reactions are serious interest, utter horror, or deer in the headlights. When I mentioned life extending technologies John fell into the horrified category. Because when everyone hears we might be good out to 150 years or so. I think it’s the automatic automatic assumption that it’ll be 150 years of decrepitude. But it won’t be.

Another character I met last night was a gentleman dressed as what his interpretation of Merlin would look like by the name of Jim. Apparently Jim knows EVERYBODY in Newport and to paraphrase speaks fluent five year old.

What I thought would be a somewhat moribund evening ended up being fun. And the book, 30 autographed copies were sold last night. Ended up leaving sometime near 11PM and finding out you can get to I-95 south via RI-4, but you come out much further down I-95 than you’d have thought damn it. So that ended up with me coming northbound on RI-4 not once but twice.

Aborted that particular mission at that point and came home. Had a really late dinner steak with biscuits and roasted zucchini/grape tomato. I am really digging Home Chef – the three meals we get from Home Chef are pretty much a highlight every week. For the $60 a week I can only say it’s pretty cool.

And I do hope my friends book gets optioned for screen play or movie someday. That would be cool.

So my help desk aka Junior Systems guy was trying to use systemctl on an Ubuntu 14.04 box. Thing is – 14.04 doesn’t default to systemctl/systemd.

To decode that last – rc is the run level. In fact rc3 is multi-user with networking.

Too funny. Now Ubuntu 16.04 is systemd so you have to use systemctl to do everything. Bit of a learning curve for an old school Unix/Linux guy like me.

It struck me that we’ve been spending a lot of money on plastic bags that just get thrown away. A complete waste of money.

So I picked up a 42 piece Rubbermaid plastic container set on Amazon for $15.99.

I’ll definitely be using for my lunches. Much better.

So at the moment I’m reading two books. With 2+ hours of commute time each day I must have something to keep me occupied.

So the first book is titled “Data and Goliath: ” by Bruce Schneier, he’s a security expert and cryptographer. I had to get it after they discussed it on AT&T ThreatTraq.

The book is a good read on privacy and how it’s being violated by the very technology we love. Just in the first couple chapters I’ve highlighted a whole bunch of stuff.

For example – I turn OFF location services on my phones. Fuck the NSA if they want to track me. Really. But the NSA deserves more derision for monitoring call meta data, emails, etc.

The other book is titled “The Master Switch: The Rise and Fall of Information Empires” by Tim Wu. Touched on all sorts of communication disruptions. For example I was fascinated to learn that when the Bell System was in in it’s infancy the lead investor attempted to sell all the patents to Western Union for the paltry sum of $100,000. The CEO of Western Union scoffed at the idea. But WU turned around a year or so later – adopted the Edison microphone and had close to 60,000 phones out there. Bell of course filed suit against WU – talk about a David vs. Goliath moment – tiny Bell System versus WU. But they won and history saved the WU attempt to make it so phone service would just be used to enhance telegram service.

It’s interesting – the more books I read in this genre, the Amazon recommendations get more pointed. It’s fascinating stuff to read.

So we had a nice breakfast – some nice Apple smoked bacon form Trader Joe’s, my special scrambled eggs, and some grill toasted french bread.

Then a realization was made, we don’t have any toilet paper or paper towels. That’s a crisis.

Booked a car for a couple hours and got to the car and realized I’d locked us out of the house. Hence the excitement.

But I’m the confident one – even at work they remark that I’m the most confident person leading I.T. they’ve ever had. And it carries into regular life. I’m pretty damned sure of myself. I’d have made a really good con artist but too much integrity for that. But Someone was getting nervous and I tried to re-assure him that we’d be in the house. If you’re reading this you can be certain we got into the house.

One of his worries is what if someone called the police. I had my ID on me that shows the same address. And knowing what I know the local  gendaremerie would have likely had assisted.

But you see I learned a few things way back when I worked at the Rhode Island Department of Attorney General vis a vis how to break into a home among MANY MANY other things.

And of course my lock pick kit was on the other side of the locked door. I suppose I should start carrying a rake and a torsion wrench with me at all times, and maybe a shallow pick. Never know when I might have to practice the art. But I digress.

What I learned was you can do all you want to secure a space, but there are always vulnerabilities. In my case the south facing dining room window – it was unlocked. And the screen window latches – all you had to do was push in the carrier rod and lift the screen, then the window. Had to swing the gate over, then boost myself up on that, through the window, after handing out the plants that reside in said window. Walked to the door grabbed my keys and then opened said door.

I did mention had that not worked, we’d have had to break some glass. Alas it didn’t come to that though.

So it’s been thunder storms since I got home this evening. Now what causes it is cool – it’s cold and warm fronts that cause it.

But there was suppose to be a really cool Perseid shower tonight that won’t be visible with all the damned cloud cover.

Nope I didn’t. I’ll explain why.

The revelations of DNC dirty tricks really frosted me. I mean really badly. How dare they.

Because I found it highly suspect that Bernie Sanders could draw crowds of 10,000, 20,000 and yet the convention found their way to nominate Hillary Clinton? Jesus it’s like the best election money could buy.