So apparently my 2019 Chevy Trax LT has Continental tires on it. And I finally realized the tires sport the H speed code or 130MPH. Nice! Now the 90 on the tire that’s the load rating. In essence 90 translates to 1326 pounds per tire The vehicle itself only weighs about a ton and and a half.

So exploring podcasts on Spotify is interesting. I get more science like suggestions. The new one is Science Vs. I believe it comes out of Australia.

What the hell I guess it’s Sunday and I enjoy learning things. So there we are.

So I got an Eldon blood test kit. I’ve always thought I was AB+ but nope. A negative. 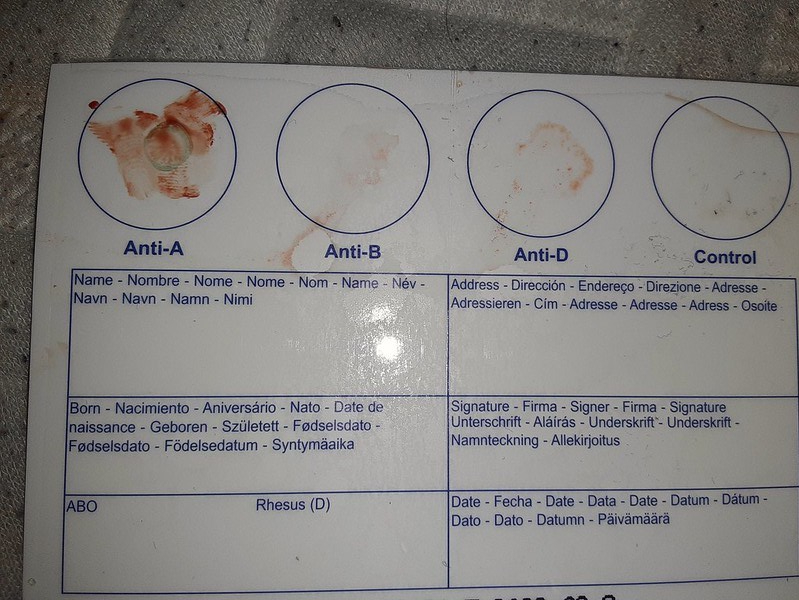 That Anti-A indicates Rh Negative A type blood. Interesting, I had always thought I was AB but nope.

So I’m plowing through the game on my little 500 in 1 handheld platform. It’s intro screen is in Japanese Kanji it looks like. But the game play is fun as all hell. I’m up to about the third of I don’t know how many levels.

Overall for $14 this little game platform is way cool.

So I’ve now found a couple more artists that I neglected to mention. Pat Metheny , Bob James, even St. Paul and the Broken Bones. Forgot I had that stuff.

Damn – so I realized I have the Amazon Music player on my phone. And I have few hundred tracks in there.

But then I realized Azymuth, Jamiroquai, Grace Kelly, and even Cameo’s Jazzier stuff. Oh I’m loving this. All the music I bought on Amazon is now playing on my phone.

I don’t know if I’ve mentioned it but I love three kinds of underwear. First is my boxers but finding them in small size is a challenge. Then of Reebok bikini underwear for men – accentuates certain aspects of my anatomy. Then of course jock straps, have three already and ordered on with a lace up front in green.

Always want to be ready for a little sexual play I suppose.

So I finished Midnight in Chernobyl. Good book on the Soviet RBMK reactor disaster. So my recommendation the above subject book popped in my amazon recommendations.

It’s by William McKeown. It tells the story of the U.S. nuclear that not too many people know about. How inter-service rivalry between the Army, the Navy and even Air Force propelled the U.S. Nuclear industry, And the story of the SL-1 incident. That’s the fascinating one.  I’m just up to the point in the book where the incident takes place. A near melt down. When you think about it there have been two incidents with nuclear power in the U.S. SL-1 and Three Mile Island.

Of course it makes me wonder how many other incidents have happened in nuclear power plants in the U.S. that we’ve never been told. I’d venture that it’s happened several times.

And thankfully the U.S. Air Force never got their nuclear powered aircraft. Seems the bio-shielding would have made it too heavy. Can you just imagine the catastrophe if one of those aircraft ever crashed.

But funny enough the U.S. Navy has done alright with nuclear power. You can thank old Admiral Hyman Rickover for that one. But it’s funny I met an old Navy guy who told me they won’t let nuclear subs and carriers dock in Europe because of the radiation risk. Yeah I know. They’re the safest fission reactors we have.

So this time around I did it this way. Shelled the shrimp and tossed the shells and some sea salt in a pot of water and brought it to the boil. Then removed the shrimp shells and boiled the pasta for 5 minutes.

Seasoned the shrimp with salt and pepper and cooked them in a little bit of avocado oil in a pan. Put them aside and then the sauce.

About 5 tablespoons of unsalted butter melted in the pan the shrimp was cooked in, 4 to 5 cloves of garlic chopped up. Some grated parmigiana cheese , a little chicken broth and some pasta water.

Now when I plated the pasta I made sure to hit it with the parmigiana cheese and some freshly chopped parsley. Then lay about 10 or so shrimp and pour some of the sauce on. It was delicious.