Ok – all this week the Boston to Wickford Junction or Providence train has been either a) late getting to South Station or b) and consistently late getting into Providence no matter what train I board at what time.

Today for example, the train took 1.5 hours for a normal 1 hour and 10 minute trip. So 20 extra minutes because it parked at the Route 128 Station for about 10 or so of those minutes. And then making the extra stop at Canton Junction was special – they’ve done that a few times this week.

This is unacceptable. I’m strongly considering plunking the $400+ down per month and getting an Amtrak pass to be honest. The Acela and Acela Regional both do the trip in 40 minutes. That’s much better. Because Keolis and the MBTA are REALLY starting to piss me off.

Today’s was interesting. Got to the North Quincy station at 4:08. Usually it’s just a couple minutes and the Red Line into Boston is there. Not today – no it got there at 4:17PM which means I missed the 4:35PM commuter back to Providence. Had to wait until 5:00PM for the next one. And of course the Red Line drivers go REALLY slowly between North Quincy and JFK.

Now I understand that after a holiday weekend you’ll have your no-shows as far as co-workers and bus drivers. But really this type of behavior on the part of RIPTA is irksome – because all the buses are GPS tracked. On the entire 20 minute walk home I didn’t see on westbound bus at all.

I’ve now made a resolution to put money aside and buy a car. I’d rather put up with traffic then to have trains to stupid things like move like a snail, or park in Mansfield for 10-15 minutes so Amtrak trains could go by us.

Now I know, I-93 and i-95 could be slightly hellish. But I’ll take that hell over commuter rail and subways.

So this evening on the way back to  Providence on the MBTA Commuter and announcement comes over that dispatch is ordering them to stop at Route 128 and Canton Junction. Something about that struck me as odd and I’ll explain why.

At each stop only one person got off the train. But here’s the rub – how did the dispatchers know that people go on the wrong train in the first place? Yeah – something reeks on that one. But the end result is we get into Providence at 5:50PM a full 25 minutes late. Of course the MBTA service has been shit all week. And I suspect with 12 inches of snow coming next week will be awful too.

And RIPTA true to form whenever it’s cold and snowy/rainy  – RIPTA is always late. It’s funny they put up these displays on all the shelters in Kennedy Plaza but the one for the 27/28 buses isn’t switched on yet. I wonder why. And I’m pretty sure they have GPS tracking on those buses now. In fact the level of technology on a bus has gone up seriously in the past 40 years. I remember when buses had manual transmissions, no air conditioning, no electronic fare boxes, no tracking, no traffic light holding equipment, and no cameras. Now of course all of that has changed, they’re automatics now and air conditioned. But it doesn’t make up for the fact that RIPTA is consistently late.

I’d like to see about 50 Billion dollars invested in improving public transit in the northeast region. I’m pretty sure if you got the congressional delegates from New Hampshire on down through Massachusetts, Connecticut and Rhode Island you have quite a few congress critters and senators. Maybe if they put their heads together we could get first class public transit systems.

So  yesterday getting in during the storm was just fine. Commuter was a little late pulling into Providence but got into Boston at it’s usual time. And the Red Line was running so I got into the office on time. Mind you this is DURING the storm with whiteout conditions and the like.

The trip home on the other hand – a commuter than normally gets into Providence around 5:20PM got in at 6:30PM. Not fun, the almost interminable ride home. The lesson in that – take Amtrak – they get priority on the rails. Pay the money for a business class ticket and enjoy the ride.

This morning the commuter to Boston was 10 minutes late, and we pulled into Boston 20 minutes late. This is on a fully packed train mind you. Not my idea of a fun time.

Get down to the platform for the red line and see this on the displays:

Yeah – that’s a bad omen. All it displays is current time, no info on next train etc. Something is fucked. 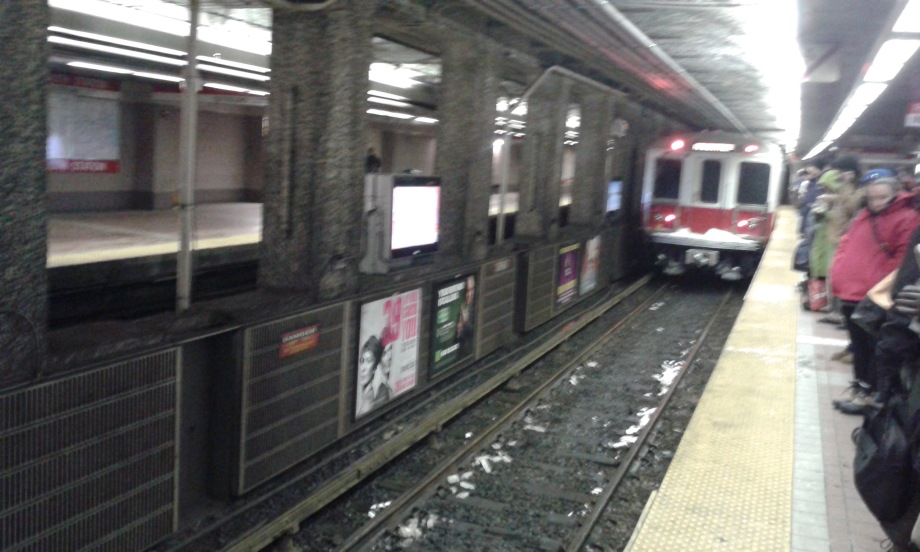 That’s the first empty train that just stopped at the station, didn’t open the doors and continued on toward Alewife.

Clusterus Fuckus! That’s what the Red Line was today. Ominous warnings about severe service delays occasionally too. A bunch of fairly pissed off people. It was pretty interesting.

What boggles the mind is there isn’t a storm today – it’s clear and sunny. Granted it’s only 10F but these trains operate in the total range of freezing to boiling. So that can’t be it. I chalk it up to typical MBTA lead in the ass.